The Sad Case of Milli Vanilli 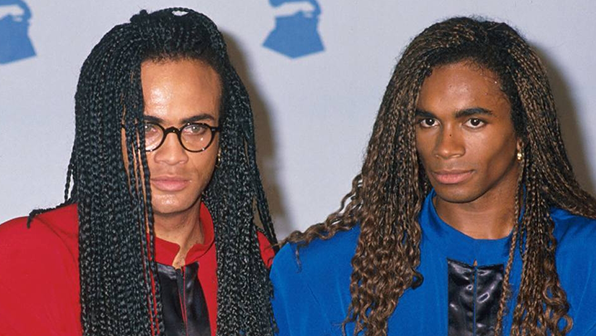 Welcome back, readers/listeners!
It's been a while. I know. Several factors come into play about the missing blog posts. But, it's mainly because, I believe I may having an existential crisis?
At, least that's how it feels. I might need mood elevators...
But I digress. Let's get into this week's topic...Milli Vanilli and Frank Farian!

So, during our talk Sunni kept singing her version of "Girl You Know It's True." Not wanting this song to get stuck in my head, I tried to think of their other songs, but could remember them.
However, this was quickly remedied when I had an epiphany. Blame it on the Rain! That's right. That was the other song they had that was A-MA-ZING.
Baby, Don't Forget My Number was another one.
But what I think is funny is, some if you listen to the lyrics to some of these songs, they make no sense. 😂 Like, "Baby, love is stronger than thunder." And, he wants to spend his life with her, but he wants her not to forget his number. It sounds like they haven't even had a first date yet... Just so many unanswered questions about these songs.
Yes, they were written by Frank Farian, whose first language is not English, but they make no sense.
The Swedish are famous making hit after hit, after hit in English. Hello, ABBA! But Germans...not so much.
Anyway. That's what I found to be funny. Because Frank Furian obviously created a juggernaut business of making artists lipsync to songs that had already been produced.

Lipsyncing as a Money Maker?

Who creating music and using more attractive faces to put it out was such a moneymaker? I feel like I've seen a movie about this.
It's about a songwriter to believes he's not attractive enough to perform his own songs, so he hires someone to be the face. And of course in the end, he realizes looks don't matter. Or some shit like that.
Either way, I think it wouldn't have been such a scandal had we known from the start. Did we even ever find out who actually recorded the songs? What's the name of that band? Where are they now? I need answers!
It's funny how so many people were butt hurt over this, meanwhile, the government has been lying to us for years, and they have no problem with that. But, again, I digress.

It's Time For Jerry's Final Thought

We've come a long way from Milli Vanilli. It's sad what happened to Fab, but Rob is still pushing, so at least there's a silver lining.
But, I believe transparency would've been better for these two. Nowadays, we want more transparency with everything, right?
We want to know where our food is sourced. We want to know what our leaders are doing. We want to know how our money is being spent.
Well, here's a little transparency from me. We'll never have true transparency until we weed out the bad apples among us in all areas...business, politics, healthcare, law enforcement, education, etc We have a long way to go, people.
Until next week, Don't Get Scammed.
Posted by Book of Lies Podcast Blog at 12:30 AM No comments:

Yep, it's been a while since we've had a blog post. And, there's a reason for that.

With everything going on in the country: the unfortunate, traumatic, unnecessary death of George Floyd, COVID-19, and president bent on dividing this country, a break from life was needed.

Sure, we've been trying to find ways to lift our spirits. Sunni's been active in her garden, growing corn, pumpkins, beets, and lots of wonderful and nutritious delights.

I've been trying to not go insane. I had partially taken to bed unless I needed to leave the house. It wasn't pretty. But it's how I maintained my sanity, and that's just what it is.

But we still recorded episodes--our latest being the blackout episode to stand in solidarity with the protests of the death of George Floyd, an unarmed black man whose life was literally crushed out of him by three policemen and one who stood idly by.

I wrote a poem about what he might've been thinking in his last moments. And, one day, when it's not so bitter in my heart, I'll read it aloud. But at this point I can't do it without crying, so...

We've got some goodies to share with y'all in upcoming episodes. And by goodies, no, I don't mean free shit.

But some garbage people doing garbage people deeds. Such as an auto manufacturer that lied to the government to make a buck. We're working on some stuff for you guys. Our listeners.

Don't worry. Once the mental health is back to optimal functionality, the blog will be an entertaining addition to the podcast episodes.

But, for now, thank you for sticking around with us. It's been a GD rollercoaster.

Much love, and until next week,