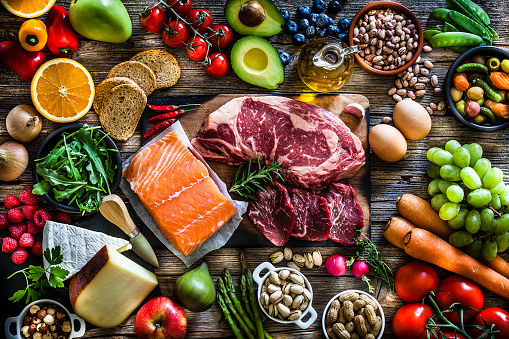 When you buy food at the supermarket or eat at a restaurant you thing you're getting what you pay for, right? Well, you probably aren't.
In this week's episode we discuss the rampant amount of fraudulent foods you're getting. From bad labeling to straight up lying, it's a bunch of fuckery.

Pumpkin puree: You know, the canned orange stuff that’s lining the supermarket walls right now? The stuff you use to make all your favorite fall desserts that’s labeled “100% pumpkin”?! Yes, well, it’s actually made from 100% not pumpkin. The mix is made from a variety of winter squash (think butternut, Golden Delicious, Hubbard, and more). Libby’s, the brand that produces about 85% of the country’s canned “pumpkin” filling, has actually developed a certain variety of squash that they grow, package, and distribute to supermarkets across the country–all the while fooling innocent, trusting consumers into believing they’re eating a pumpkin.
As it turns out, pumpkins can be fairly stringy and watery; certain varieties of winter squash make a richer, sweeter puree that works way better for packing the now-ambiguous flavor we all love into our favorite fall dishes. Additionally, the USDA is fairly lenient with gourd terminology in general, which is why it’s perfectly legal to label a food product as “pumpkin” when, in reality, it’s made from a different variety of squash.
So you’ve basically been eating butternut squash pie, squash bread, and drinking SQUASH FREAKING SPICE LATTES this entire time.

By law, Parmigiano-Reggiano is allowed to contain only three very simple ingredients: milk (produced in the Parma/Reggio region and less than 20 hours from cow to cheese), salt, and rennet (a natural enzyme from calf intestine). Three other ingredients, Cellulose Powder, Potassium Sorbate, and Cheese Cultures are not found in Parmigiano-Reggiano - they are completely illegal in its production. Yet all three are in Kraft 100% Grated Parmesan Cheese (I’m not sure if that means it is supposed to be 100% “parmesan” or simply 100% grated, which it certainly is). It’s far enough from the real thing that Kraft was legally forced to stop selling its cheese labeled Parmesan in Europe

Kobe beef is only produced in Japan. It’s a style of beef that comes from Kobe Japan and is from the Wagyu breed of cow. It’s very rare. So much so that you can only get at very select restaurants in the US. As such, many serve what’s known in the trade as “wangus,” a hybrid of domestically raised Wagyu breeds and common Angus and call it Kobe. And some don’t even bother using any Wagyu breed at all.
Wagyu beef is known for its pink color and it’s marbling and flavor. Kobe is even more desirable and goes through an extensive approval process to even be considered Kobe. And it’s very, very expensive.
Article from Bon Apetit goes into great depth and detail on the process.

In 2013 I actually wrote an article about this for Digital Journal about fish mislabeling. At the time it was ⅓ of fish in grocery stores and sushi restaurants were being passed off as other types of fish.

At the time a 2-year Oceana study determined a fuckton of fish was lislabed...Ocean test the fish DNA and discovered what was going on. They’re still fighting to fix the issue.
A whole lot of the fish we buy at your favorite restaurant, the supermarket, or even your local fish store aren’t what they say they are. They often substitute white fish for other types of fish. And even label farm-raised fish as wild-caught to make the consumer pay a higher price for a lower quality fish. Gordon Ramsay would skewer these people.
Some of the most commonly faked fish are:
Slickhead and tilapia which are passed off as Alaskan or Pacific cod, king mackerel and whitefin weakfish labeled as grouper, blueline tilefish as Alaskan or Pacific halibut and, Pacific ocean perch, yellowtail rockfish, giltheaded sea bream, madai, tilapia, white bass all being labeled as red snapper. 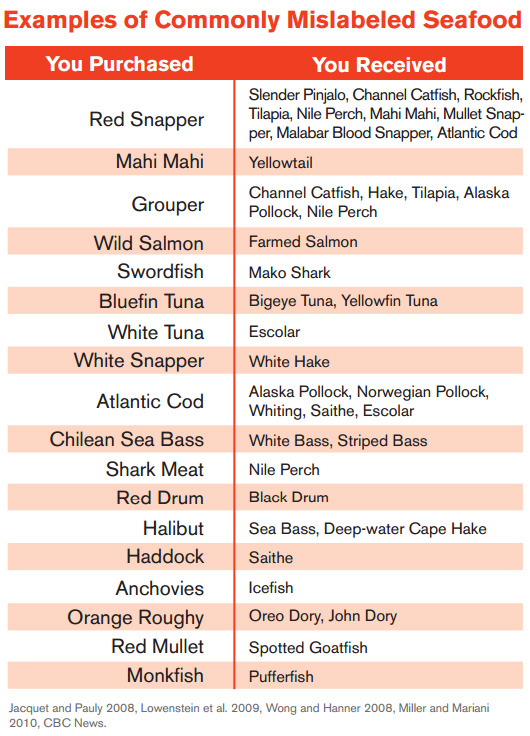 This can be problematic because of the mercury levels in specific types of fish. There is a Do Not Eat list of types of fish that are too dangerous to eat

Extra virgin olive is high-quality olives mashed into a paste and pressed to express its oil that is then bottled. But’s likely that that’s not what your getting. It’s estimated that 80% of the olive oil people are getting is either low-quality olive oil, mixed olive oil from older harvests and low-quality oils, or ranid oil.

Why? Because the FDA doesn’t actually regulate olive oil. There are no rules to stop these brands from lying to you on their labels. Some olive oil producers are working to get the FED to set standards for calling olive oil extra virgin olive oil, virgin olive oil, and just plain old olive oil. But, for now there’s bupkis to ensure you’re getting what you’re paying for. Because EVOO is more expensive than the just plain old oo.

For now, here are some of the companies to watch for. Check your cupboards because you probably have one of these on your shelf which means you paid an inflated price for garbage olive oil.

Also, bottled in Italy doesn’t mean made in Italy. You could be getting olive oil from olives grown in other Mediterranean countries, which are from lower quality olives. If your olive oil isn’t grown, produced, or made it Italy, but bottled in Italy, it’s probably not what you think it is.

If you have a local honey farmer, you really should be kissing their bee-suited asses. Because apparently honey is the 3rd most faked food in the U.S. Yep…

So, there’s manuka honey, which is produced in New Zealand. But since, it extremely hard to differentiate from regular old orange pollen honey or clover honey.

“The position of the American Beekeeping Federation is that real honey must have pollen, but lots of other domestic honey producers disagree and ultrafilter theirs to remove the pollen, which helps keeps the product from crystallizing.

One legitimate fear is that countries like China use the ultra-filtration or ultra-purification processes to mask the origin of the honey, which is then transshipped [sent to an intermediate country and relabeled as a product of that country to disguise its real origin] and sometimes mixed with a small amount of pollinated honey, from say India, to throw off testers. Sometimes Chinese honey is cut with much cheaper corn syrup or fructose syrup to enhance profit margins, and sometimes Chinese producers even feed corn syrup to the bees to get it into the honey more “naturally.” The importation of Chinese honey was specifically banned because it is so often adulterated.

The American Beekeeping Federation is the industry group representing U.S. producers of non-ultrafiltered honey. They petitioned the FDA to create a “standard of identity” for honey

the FDA summarily denied this request. While it told the federation that it shared their “concerns about adulterated and misbranded honey,” regulators chose to defer to Webster’s, literally, citing the dictionary’s definition as adequate: “a thick, sweet, syrupy substance that bees make as food from the nectar of flowers and store in honeycombs.”

One legitimate fear is that countries like China use the ultra-filtration or ultra-purification processes to mask the origin of the honey, which is then transshipped [sent to an intermediate country and relabeled as a product of that country to disguise its real origin] and sometimes mixed with a small amount of pollinated honey, from say India, to throw off testers. Sometimes Chinese honey is cut with much cheaper corn syrup or fructose syrup to enhance profit margins, and sometimes Chinese producers even feed corn syrup to the bees to get it into the honey more “naturally.” The importation of Chinese honey was specifically banned because it is so often adulterated.

Posted by Book of Lies Podcast Blog at 4:04 PM No comments: