The Scamminess of Corona Virus and Carole Baskin 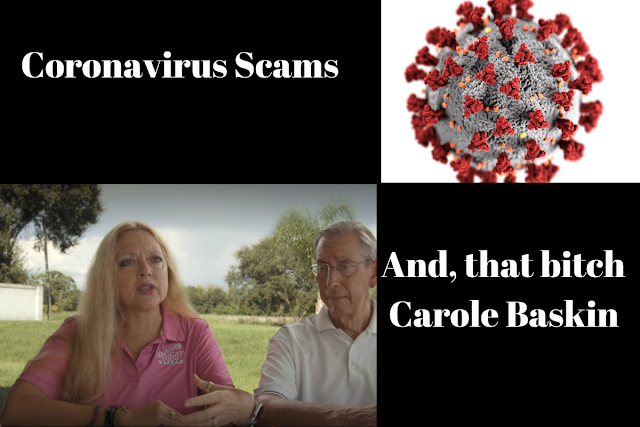 Another week of Coronavirus Chaos is underway.

People are going stir crazy, leaving their houses to congregate in groups. And, some might be trying to have small gatherings, play dates, visit friends and neighbors. Others are hitting the outdoors in the RVs, heading to off-roading camp-sites to get out of the house.

Whatever you're doing, remember to stay safe. It's not just your health you may be endangering.

Last week resulted in all kinds of interesting things.

Mainly, scam artists have been working hard to con people out of their money, and Netflix is giving us train wreck after train wreck for our viewing pleasure.

So first we discuss the scams circulating around the country. Then we get into the magnificent grossness that is "Tiger King: Murder, Mayhem, and Madness." Feel free to jump to that part of the blog, if you're not interested in learning what scams to look out for.

As we continue to shelter-in-place and do our best to stay away from other people, we also have to be vigilant about the scams developing due to the situation.

There are currently quite a few ways scammers are taking advantage.

Scammers are now sending emails with links for the recipient to click. It may contain a form to fill out, out direct you to a website that looks similar to the website the scammers claim to represent.

They may claim there's been suspicious activity on your account. They may say you've ordered something, but they aren't sure it was you so you can click to verify or to deny the order. Or they may claim they need you to reverify or enter some information, etc.

They even go as far as creating a similar email and formated emails using the company's logo, and other characteristics to make the email or text look legitimate.

When in doubt, ignore these messages. You can call the company to verify they send these types of emails, but often, they'll tell you it's a scam. If this happens, report the event to the Federal Trade Commission.

One of the ways scammers are taking advantage is the promise of hard-to-find items, such as hand sanitizer, rubbing alcohol, bleach, and Lysol, to name a few.

They may set up a website, and show up in your search. The site says they have the item and you make a purchase. However, you won't receive anything.

They've taken your card information and your money, and now you have nothing to show for it.

Be careful of where you make online purchases.

Another scam targets elderly people, offering Coronavirus testing or testing kits for the elderly. It either asks them to pay up front or asks for their Medicare information.

If you have active symptoms and need to be tested for this virus talk to your primary care provider, to go to the emergency room.

When in doubt, hit the FTC website for information on current scams and report any new activity. They take these reports seriously and will shut down these websites, these emailers/texters/callers.


Where to begin with this circus of a show.

There's a colorful cast of characters, tons of endangered species big cats being used for personal gain, and a crazy hippy lady pretending she's doing God's work who goes by the name, Carole Baskin. Oh, and also she murdered her husband, chopped him up and fed him to her exotic cats.

Our main character goes by the name, Joe Exotic. He's a gay, gun-toting, redneck, who has a flair for the dramatic, and the owner of the G.W. Zoo.

Joe and Carole, along with all the other "big cat people" believe they're doing what's best for these exotic animals. Nevermind the fact their numbers are nearing extinction in the wild.

The level of wrong, in all of their storylines, is just grossly glossed over.

And, we can't forget the crazy cult leader, Kevin "Bhagavan" Antle who is among the creepiest of the cat people. He has a harem of women who seem to be brainwashed by his white facial hair and his tigers. Yuck!!!

Anyway, the gist is-- Joe and Carole have been fighting it out in court. The majority of his online content and music videos, because yes, he's a country singer too, are based on or about Carole Baskin.

Joe has all kinds of personal problems, including two husbands. He thinks he's a celebrity, runs for president then runs for governor. Gets involved with shady-ass Jeff Lowe, tries to hire a hitman to take out Carole, and gets arrested and convicted on charges of animal abuse and murder for hire.

And did I mention that none of these Zoos/Wild Animal Parks/Facilities pay their employees a living wage?

There are so many things wrong with these places. But, apparently, they aren't breaking any laws?

Anyway. Take a listen to the episode, and leave a comment on this post, or hit us on our social media channels. We always love to hear from listeners, whether it's good or bad.

Until next week...Don't get scammed.
Posted by Book of Lies Podcast Blog at 11:36 AM No comments: 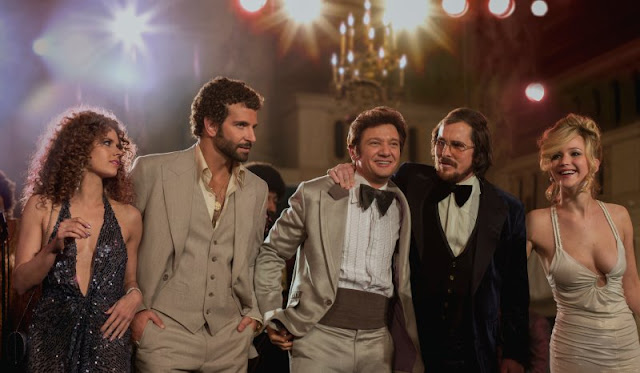 Yes! We finally have a blog.

It should've happened already, but since I feel like we have more time now--social distancing and all. But Sunni pretty much does all the podcast stuff, so I had to put my two cents in and get to typing. I mean really. (Pull your weight, bitch!)

So the blog posts will typically be written by yours truly -- Brandi.

With all the doom and gloom on the news lately, we feel like the podcast just isn't enough time to get all the thoughts out. So, here we are with additional content for ya.

How are excited are you?

But, first, onto this week's episode.

This week, Sunni elected to discuss the movie "American Hustle" starring a whole lot of celebrities doing fucked up shit to each other.

This movie was a hit at the box office, that won a whole bunch of awards. Yet, it took home no Oscars, although it was nominated. Oh well, lots of movies and people are robbed during Oscar season. Maybe we should discuss the shadiness of the Academy in a future episode?  (Comment if you want that.)

During this episode we discussed Bradley Cooper's perm, Amy Adams' fake English accent, Jennifer Lawrence playing an unstable wife, Jeremy Renner as an unwitting politician who was duped into dirty deeds, and the ever-welcome Robert DeNiro playing a gangster.

But the bottom line is the FBI frames people. And, FBI, if you're reading this--I SEE YOU!

It wouldn't be fair for me not to mention the state of the world in our first blog post.

If you've been under a rock in recent months, or like Jared Leto, fell off the earth for a minute and hadn't heard the news, the world is under attack. A virus has struck fear into the hearts of earthlings. So much so that they all shit themselves and had to run out and buy up all the toilet paper.

Those of us who didn't hit the stores and hoard all the essentials, are listening and following the guidelines that the Center for Disease Control put forth. The CDC said to shelter in place, practice social distancing, and do go to crowded places unless it's absolutely necessary.

In other words, avoid groups of people larger than 10, unless they're your immediate family.

Lucky for me, that's my natural state. But for some others, they're losing their shit. 🤷

We're doing what we can. We push on because we know this will pass. But, damn 2020 got off to a shitty start.

This might go down as the worst year in the 2000's to date. No--not might. It is. Bar none. Including the crash of 2008. Which we discuss with KT and OTI of For Your Reference in their The Big Short Episode.

But, this virus is claiming lives, and making people act like utter assholes.

So we at Book of Lies Podcast want to offer you a few ideas on how to ride this thing out. Especially if you're a high-anxiety person.

Ways to Cope During the Coronavirus Crisis

No, we are not mental health professionals, but we have our share of tips and tricks. For official ones hit the CDC website.
Do you have healthy ways you're managing your stress and anxiety? We'd love to hear about'em.

If you'd like to support us so we can keep you informed about the frauds, scams, liars and cheats, check out our Patreon.

And if you want to support our small businesses, because yes, we are entrepreneurs. Please check out our business links below.

And until, next week. Dont' get scammed.

Posted by Book of Lies Podcast Blog at 12:00 AM No comments: